DJI have announced a new drone the DJI Tello which is the smartest ‘toy’ drone on the market. The drone was manufactured by a company called Ryze but runs on DJI’s patented software. The DJI Tello is set to release in Australia early March at a RRP of $169.

Honestly, the Tello is really only comparable to the DJI Spark, Propel range or most of the Parrot drones. This is not a drone to be compared to the prosumer categories like the Mavic Pro, Phantom and Inspire series from DJI.

There are a couple things here that this list doesn’t quite cover which is the new feature unique to the DJI Tello which is the use of Scratch (Simple, Block-based visual programming) and SDK (Software Development Kit – more advanced programming then Scratch). This is really cool and I think is the best identifier for the target market here. It’s geared towards getting kids interested in coding logic and robotics which based on how integral technology is with the current education system will definitely help augment any information system learning.

Both of these drones are designed for beginners so unlike some of the higher tier DJI drone models there aren’t as many features or complex camera setting and video modes to learn. The DJI Spark is slightly more complicated in that it has more features and modes to learn, the Tello is as easy as turning it on and flying. Though in all fairness both have been designed to be as easy as possible for beginners. Another factor to consider is that due to its size and weight the DJI Tello cannot be flown in even slightly windy conditions its primary design is for inside flying and low to the ground in wind protected areas. The DJI Spark fairs a little better in windy conditions but if you’re looking to use a drone outside and above about 40-50 feet you would be looking more towards a DJI Mavic or Phantom if you wanted stable footage. 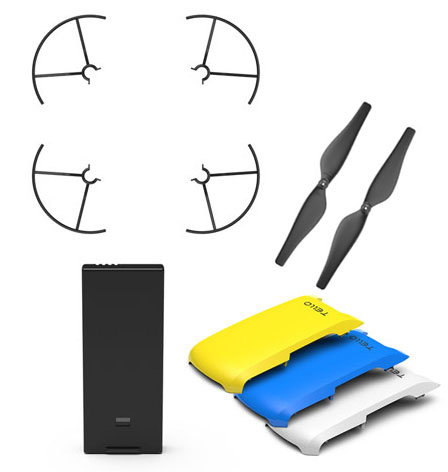 Regarding camera quality the DJI Tello you probably won’t be winning the National Geographic Photo competition (you might have shot at Dronstgr.am though). It has a 5MP camera and an 82.6-degree FOV which is slightly wider then the Spark’s FOV. The Tello's camera is inferior to the Spark’s camera, though the Spark has a 12MP camera capable of (3968x2976 resolution). The video shot on the DJI Tello is 720p at 30FPS once again the DJI Spark performs better shooting at 1080p at 30FPS.

Both of these drones have a whole bunch of extra features gesture control capabilities. The DJI Spark has more commands though. Only time will tell how well the other features unique to the DJI Tello are received though, Scratch sounds very interesting and presents a great way to do more with the drone and an easy way to enter in the full range of DJI’s SDK capabilities.

An example of SDK’s capabilities is that you set up a specific series of actions be that flight path, taking a photo or even doing a flip (in the case of the DJI Tello).

All in all, the Tello is an excellent drone for its price point. It’s definitely a beginner drone and a good place to start learning about drones and flying them. It’s easily used by kids, and it’s size along with the propeller guards and vision protection system short of flying it on purpose to collide with something the drone shouldn’t run into to much trouble around your home. Coming down to whether you should buy a DJI Spark or a DJI Tello I would go with the Tello. The DJI Spark is a good drone and is perfect for a specific target audience but the Tello doesn't represent such a serious investment and allows you to introduce yourself easily into the drone market. The DJI Spark is a sort of middle ground where it doesn't always fit with the intermediate audience and has priced itself out of most of the beginner drone market.